In the two years that I have been part of the Engineering and Manufacturing Route Panel, we have reviewed and approved more than 100 apprentice standards! It’s been a fascinating time and it’s really rewarding to be contributing to the quality skills landscape.

One of my other voluntary roles is as a Trustee of the Aston Martin Heritage Trust, a small charity set up to preserve the heritage of Aston Martin and Lagonda cars. AMHT looks after a wide variety of motoring history, for example, the oldest Aston Martin still in existence (called ‘A3’ because it was the third one ever made), the World Endurance Championship trophy won by Aston Martin in 1959, and David Brown’s desk from the factory at the time his DB5 was appearing in Goldfinger. We are entirely independent from Aston Martin, but they recognise us as their official archive and regularly give us prototype cars, mock-ups and other material of interest.

Of some 80,000 Astons made in the past century, we believe that the majority are still roadworthy. To keep these properly maintained and on the road takes specialist skills which are mainly held by experienced people at the factory or in a range of small independent workshops around the country. A3 is 100 years old next year – and there are only a handful of people in the country who have the skills and knowledge to work on it. As with many areas of engineering and manufacturing, the workforce that holds these skills is ageing and we need to make sure that the sector can recruit and train the right people with the right skills.

So, I was delighted when last year our Institute’s Route Panel was able to approve the Heritage Engineering Technician Apprenticeship Standard, developed by a group of employers in heritage sectors such as automotive, aerospace and boat building. This has the potential for helping preserve and develop the skills that the Aston Martin Lagonda heritage community needs. 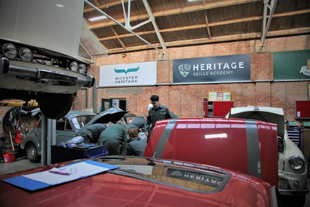 The picture above shows some apprentices at the Heritage Skills Academy at Bicester, one of the largest providers of training for this standard in the automotive sector.

But there is much more to be done to encourage employer awareness and take up – something I know that the Institute and wider government is focusing on during National Apprenticeship Week. This is where AMHT is planning to help by promoting apprenticeships in the Aston Martin community, not just in heritage areas but in modern vehicle design, manufacture, and associated business skills. Last week, at the Royal Automobile Club in Pall Mall, we were delighted to announce our new AMHT Apprenticeship Awards to find and recognise the best apprentices working with Aston Martin cars in the UK and globally; these are prestigious awards and we look forward to finding out the stories and achievements of the candidates over the next few months.

I’m going to be working hard to promote the new AMHT Apprenticeship Awards and encourage employers in the sector to consider the Heritage Engineering Technician standard and other standards to suit their businesses. I’m looking forward to continuing with my Route Panel duties to keep making sure our Engineering and Manufacturing standards are the best they can be.