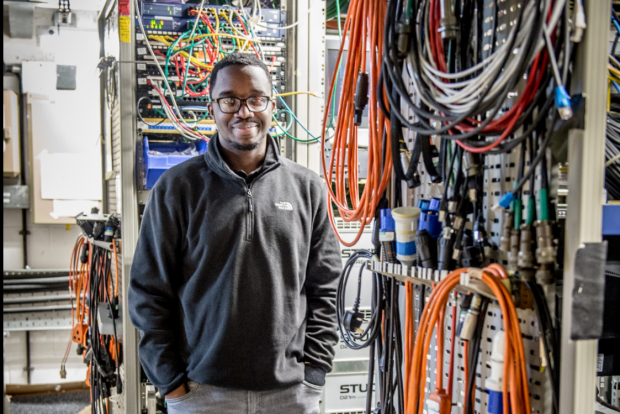 Involved in the theatrical arts and thinking about taking on an apprentice? Get the lowdown from two people who are working as apprentices at London’s Royal Opera House.

Alexander, how did you first get to hear about the apprenticeship, and what made you apply?

Describe a ‘typical day’ as an apprentice at the Royal Opera House?

There isn’t a typical day at the Royal Opera House. Every day is different. That’s the fun thing about working here. I could be coming into work at 8am, and running two shows that day. Or another day I might be seeing to the dismantling of one show, and also helping to put on the new show.

How do you find the workplace/college balance?

At first it was tricky because the year I started was the first year that apprentices were not obliged to physically go into college. Instead, we were offered the chance do the work online and upload so that the tutor could mark it and give feedback. We had reviews roughly every eight weeks so we had an idea of what we had to do, and what areas we needed to work on. The managers are flexible, you can let them know when and where you planning to do your work, and they are fine with that.

When you help build a set, and you then get to see this set on stage in front of thousands of people you feel proud - and you feel a part of a team.

What do you enjoy most about your apprenticeship?

I enjoy everything about the apprenticeship. From learning different things that you won’t learn anywhere else, to just leaning the basics of health and safety. When you help build a set, and you then get to see this set on stage in front of thousands of people you feel proud - and you feel a part of a team. The staff are friendly, and you can ask them any kind of question and they will happily answer.

Is the apprenticeship what you expected?

The apprenticeship is one hundred times better than I imagined. I thought I would be watched and followed by someone everywhere I went, but no! You are left alone to do things and if you mess something up you have to do it again. I like this because, in my mind, learning from your mistakes is a good way to learn.

What would you like to do after your apprenticeship is completed?

After my apprenticeship, I would either like to work on a cruise ship as a stage manager or production manager, or stay on at the Royal Opera House and join the stage management department.

What advice would you give to someone considering applying for an apprenticeship at The Royal Opera House?

Apply. This was the best decision I’ve ever made. If you want to learn and work at the same time then this is the place to be. Just make sure you are hardworking and that you have a passion for technical theatre.

Coming soon -  hear from  Mel Wells, a lighting apprentice on her experiences as an apprentice at the Royal Opera House

Click here for a range of Creative Design standards.