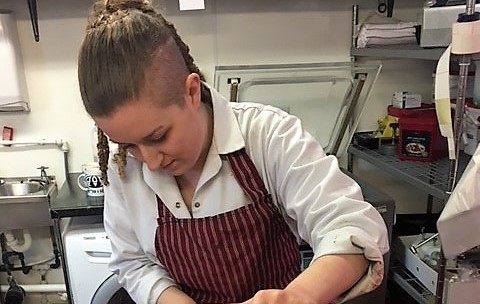 Why did you decide to go into butchery?

My great grandfather was a very talented butcher when he was young, and successfully ran three of his own butcher’s shops in Yorkshire. Unfortunately, none of his own children or grandchildren carried on his talent and success during his lifetime. So I decided to follow in his footsteps, and I aim to be just as successful as him!

How do people respond to the fact that you are a woman in a male dominated industry?

Most people have responded positively. Some customers have said they are proud of me because I am doing a job that may have held barriers for women in the past. That said, some customers have been shocked or a little unsure as to why I’d want to work in such industry. But, as a female in this industry I have found that my achievements have always been fully acknowledged.

Why did you think an apprenticeship was right for you?

I’m very hands on and practical, and not incredibly academic. I think an apprenticeship makes it easier to stay focused because you’re learning on the job and fully involving yourself in what you’re learning. I like to be able to see and feel everything in front of me. I’m not very strong in terms of writing, but I’m good with words when talking about what I have learnt face to face, which is useful in an apprenticeship. I don’t enjoy being in a purely ‘educational’ environment, so I didn’t feel university or college would be right for me. But the apprenticeship has opened up a new world for me that has allowed me to be ‘me’, and to actually enjoy learning.

Did the apprenticeship make you feel differently about yourself in any way?

During my apprenticeship I was told that I was one of the most consistent and switched on students, which felt good to hear. I then went on to become the first female butchery apprentice to receive the highest grade (‘Pass with Excellence’) when I had my final assessment.

This programme has also given me a chance to grow as a person, and learn how create relationships with both customers and colleagues.

Would you encourage other women to get involved in butchery?

Yes. I would definitely encourage other women to involve themselves in the butchery world as there are so many opportunities out there. My experience has shown that you don’t have to be male to work as a butcher – anyone can do it as long as they are dedicated and willing. I am also proof that it’s possible to be a strong female character in a male dominated industry, such as butchery.

This was the first time this type of apprenticeship had been launched – did this concern you?

Yes I did have some worries at first. My colleagues and I were essentially the ‘guinea pigs’ and we were not completely sure of how it would work, or how things could go. We had questions about the apprenticeship that couldn’t be answered at the time. And at the beginning there were a few challenges because of its newness, but very soon the students and tutors found a comfortable and easy way to deal with all the new information. The tutor at Reaseheath College, where I had my training, was always really supportive and guided me through the process every step of the way.

How did you hear about the apprenticeship?

I found my apprenticeship on a website called Indeed. This website then led me to the Reaseheath College site which gave me more information on the butchery apprenticeship. At the time I had just finished sixth form college and had a part-time job as a receptionist.

What happens on a typical day?

At the start of the day I set up the meat counter and make it ready for the customers. After this I see to orders. The shop takes orders from pubs, restaurants and cafes, which had to be completed by 10am so that they can be delivered in time.

Throughout the day I get to learn not only traditional butchery skills, but also the new methods which have developed as butchery has evolved. At the end of the day I help give the shop and work room a full clean down, always making sure to meet the highest standards.

What are your plans for the future?

Short-term, I’d like to experience working in butcher’s shops in different towns in the UK, to see how things differ - in terms of sales and produce. Then I’d like go and work in other countries, especially Europe and Canada, to learn about how things work in different parts of the world, where different livestock is available. Long-term, I might like to own my own traditional butchers. At the end of the day it would be great to have something to show for all the effort I’ve put in to my work, and all the hard work I plan to put in.

Lucy took up the FDQ Diploma in Professional Butchery Level 2.

Find out more about Lucy's apprenticeship on our website