For National Apprenticeship, we spoke to Jo Ward, who recently joined the Institute's health and science route panel. Our route panels consist of employers who are experts in their industry. Their role is to review apprenticeship standards and technical qualifications so that they meet both employers’ and learners’ needs.

Jo tells us about her amazing career in tennis, from ranking 154 in the world to a professional coach. 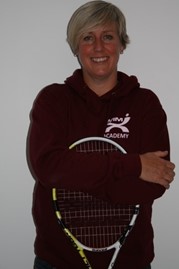 Straight away I was hooked

I picked up a racket late, at the age of 13, but straight away I was hooked. I had the opportunity to commit to tennis almost from the start. I played every morning before school, every lunchtime, and every evening after school. However, it took a toll on my body, and I underwent my first knee surgery at 15 and was told I’d never play again.

Being told I would never play again was devastating. Tennis had become my whole life, as I’d gradually withdrawn from all other activities that took time and energy away from playing. I underwent my rehab as instructed and tried to keep my feel for the ball by playing seated in a chair, but even that made the swelling and symptoms fire up again. My life became pretty hollow and directionless at that point; every so often I would try to play and be devastated all over again.

Until, one time, I wasn’t. My knee didn’t react. So, tentatively, I started to play and move a bit more, until I was back into full-time mode.

At the age of 17, and after three knee operations, I made it back on to a tennis court and rekindled my aspiration of playing professionally. At the age of 19, I turned pro and marked the year by competing in my first Wimbledon and winning the British title to end the year as National Champion.

I represented Great Britain several times in Fed Cup (now called the Billie Jean King Cup) and other international competitions, and I reached a career-high of 154 in the world.

I also got to travel the world for my job and mix with so many people from different cultures speaking different languages. It was an amazing experience.

A move to coaching

After a total of six knee surgeries, I called it a day on pro tennis in 2000 at the age of 25 and transitioned into coaching. At first, I tried on quite a lot of roles within coaching to see where my passion and expertise lay.

Eventually, I found my niche in coach education.

I think coaching suits my personality. I love learning and I love problem-solving, so if you combine those two together you’ve got the perfect recipe for a coaching environment. As a coach, you’re constantly learning about your players, and you can be really creative when trying to help them through a challenge. The other benefit, of course, is that I still love to play tennis, so coaching enables me to get out on the court.

Learning on the job

I am passionate about any way in which people can pursue their ambitions and find their own way of learning. Within the coaching programme that I established and run with some colleagues from my pro player days, we have tried to implement a pseudo apprenticeship environment for our coaches where they are in a safe, paid, and on-the-job learning scheme with more senior and experienced coaches to mentor and guide them.

Our inspiration, at Wimbledon Experience (WimX), was to create a kind of teaching hospital for coaches.

Most qualifications in sport are competency-based, but that’s very different from being competence-based. Competency-based qualifications produce coaches who are good enough to pass at that moment they’re assessed. However, often what is being assessed is a performance, not evidence of learning and skill development.

In a competence-based system, like in medicine, you are continually improved on the job. No one wants to have surgery with someone who’s just passed an exam and done no further learning – I can attest to that!

Looking back, if I were a school leaver, I would have loved to have done an apprenticeship. The opportunity to have an immersive experience in a field you want to make your future is invaluable.

Continuing to learn and improve

I am currently undertaking a PHD, investigating the psychological effect of stereotypes on girls and women in tennis.

I had two main reasons for pursuing this. Firstly, I have been a long campaigner for equality for women and girls in tennis. Underpinning that with some academic rigour and credibility was something I thought would help the cause. Secondly, within my sport, I have gone as far as I can go to develop myself through formal qualifications. So, I took the decision to look outside of tennis for continued areas of self-improvement.

We have lots of research about the pushes and pulls that cause girls to drop out from sport, so any area we could look at that would counteract those could potentially have a big impact. I would find it very exciting to explore whether apprenticeships could help girls and women into tennis.

We have so many different apprenticeship standards available on the Institute’s website, including coaching professional and community sport and health officer. We are currently in the process of developing an apprenticeship for a sports coach too.